1934: The Great Depression worried some folks, but not Paul Morrison. With his wife Leona and young son, Howard at his side, Paul E. Morrison, Jeweler opened in the State Theatre building in downtown Kalamazoo.

1936: Having outgrown his one-room, one showcase store in just two years, Paul Morrison moved his store across the street to its flagship location at the corner of Lovell and South Burdick. 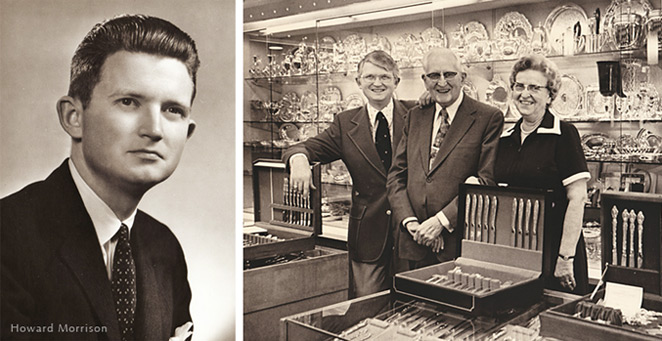 1956: Howard Morrison graduated from WMU and joined his parents' firm, specializing in diamonds and colored stones.

1958: Brides and grooms flocked to Morrison's, and by 1958 the next-door property was added, doubling the size of the store. Couples could now choose their bridal jewelry and register for fine china, crystal and sterling silver all in one visit.

1960: With his passion for art and a head for science, Howard received his Graduate Gemologist degree from the Gemological Institute of America and became head of the Diamond Department.

1963: Paul E. Morrison earned a new title: Mayor of Kalamazoo. The crowning achievement during his mayoral term was establishing a special relationship with Numazu, Japan as our Sister City.

1974: Diane Morrison joined her father and grandparents while still in high school, assisting customers and writing and recording the company radio ads.

1978: Paul and Leona Morrison celebrated their 50th wedding anniversary. Paul continued his life's work until his passing in 1985. Leona passed in 1991.

1992: Cynthia Morrison, another third-generation family member, joined the staff in 1992, assisting in the office and coordinating repairs.

1996: Brother Michael Morrison came on board, with a special interest in diamonds and bridal jewelry.

2010: In tribute to Paul Morrison and his watchmaking skills, the store introduced its exclusive collection of fine timepieces for men and women--the Morrison Signature Watch Collection.

We have jewelry professionals ready to help.